Johnny Horne (Robert Bauer), the mentally disabled son of Benjamin Horne who lives in the rural Northwest town of Twin Peaks, USA. Robert Davenport played the role of Johnny in the series Pilot.

Johnny is the older brother of Audrey Horne (Sherlyn Fenn) who was allegedly the cause of Johnny’s disability when Audrey, as a toddler, pushed her nine-year-old brother down the stairs years earlier on Thanksgiving day.

His head trauma caused Johnny to labeled as “slow.” Audrey described him “as 27 years old but in the third grade?” Dr. Lawrence Jacoby, Johnny’s therapist later stated that Johnny’s condition was self-induced: a retreat to childhood as a result of an unknown emotional trauma.

On February 24, 1989, Johnny repeatedly hit his head against a dollhouse, upset that Laura missed her tutoring appointment. He was unaware that Laura had been murdered the night before. 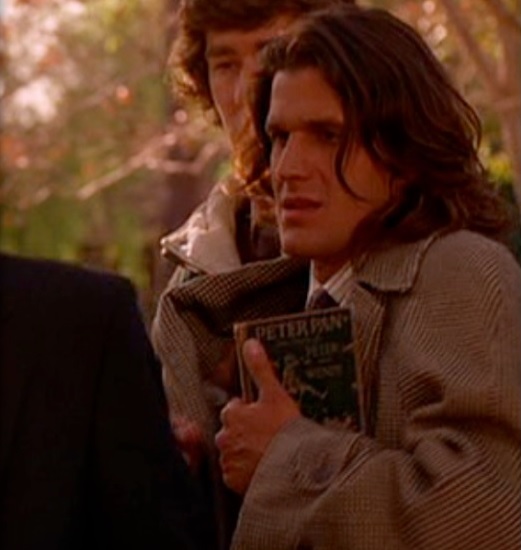 Later, Johnny attended Laura’s funeral without his Indian headdress. After a prayer, Johnny shouted “Amen!” Johnny carried a copy of his “Peter Pan” book to the service.

NOTE: In the 2017 revival of the series, Johnny (played by Eric Rondell) is 25 years older but still disabled. His mother, Sylvia Horne (Jan D’Arcy) straps a helmet on his head because he is prone to bang into things as he runs around the house. He had previously knocked himself unconscious when he ran into a wall.

Soon after, Richard Horne attacked/strangled and robbed Sylvia (his grandmother) during a home invasion. Johnny was helpless to assist his mother because she had tied her son a chair with ropes to keep him from further harming himself.

Michael “Mike” Henry (Michael J. Fox), beloved TV news anchor diagnosed with Parkinson’s disease who initially left his job to focus on his health and family, but returned four years later to pick up his career at WNBC in New York, despite his disability.

After a long day on the job, Mike returned home to his overprotective wife, Annie (Betsy Brandt), his daughter, Eve (Juliette Goglia), an aspiring novelist;  and his two boys, Ian (Conor Romero), the eldest; and Graham (Jack Gore), the younger son, whom Mike taught to ride a bike.

And then, there was Andy (David Furr), Henry’s doorman; Mike’s sister, Leigh Henry (Katie Finneran) who moves in with the family when a bed bug infestation forces her out of her home; and Mike’s parents, Steve and Beth (Charles Grodin and Candice Bergen) who visit on Thanksgiving.

Born Michal Andrew Fox on June 9, 1961 in Edmonton, Alberta, Canada, actor Michael J. Fox left his TV series SPIN CITY, much like his character Mike Henry. And in later years, he returned to entertainment and appeared on such shows as BOSTON LEGAL, RESCUE ME, SCRUBS and THE GOOD WIFE.

Actually Blinky’s not blind. He suffers from Bozman Symplex; he see 25.62 times as much as we do. Blinky uses his ability to see more than the average eye to help his friend Mickey (Mel Johnson, Jr.) a visual effects supervisor on the show.